Life on the line, photojournalist and reporter in conflict area. 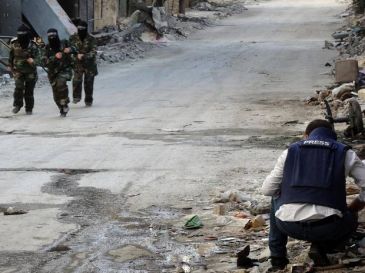 Recently there are several cases of photojournalists or reporters died during their coverage. Camille Lepagem, 26 years old French photographer, was killed in the Republic of Central African. Camille’s case was only one month after Anja Niedringhuas, Pulitzer award photographer, killed in Afghanistan while he was on his way to president election site.¦  Two events, separated by only 1 month, is likely a bad sign for anyone who works in conflict area. Their life is on the line, shorter one.

Not only photographer that becomes target, kill or kidnap, but also reporter. In April 4 dead bodies of French reporters, kidnapped by Radical Muslim group in Syria for longer than 10 months, were found in wasteland between Turkey and Syria border. The total photographer and reporter death toll in Syria is now reaching 65.

Reporter without Border (RWB) stated that more than 84 reporters have been kidnaped around the world. In Mexico reporters are always be targeted by drug dealer whenever they try to cover the story. Reporters in Syria also become a tool for negotiation. They were kidnaped and treated for ransom. The rate of both kidnap and ransom in Syria is surprisingly high.

Darren White from the security provider in UK said that Kidnaping comes from 2 main motivations, money and politics. Kidnapers operate in group with well design tactic, they scout and choose the target, they plan the assault and escape route and finally they know how to get ransom. In order to avoid kidnaped, photographer and report must keep their eyes open. There are always a sign before kidnapers start their operation and most kidnaped reporters often ignore or reject warnings that occurred.

RWB suggested that any photographer or reporter who needs to travel to unfamiliar place should study the route and find more information about that place. Always select airport whenever meet with unknown source. Learn how to survive if caught or injured. Moreover, do not provide too much personal information, especially location and activity. Public information should also be encrypt as well.