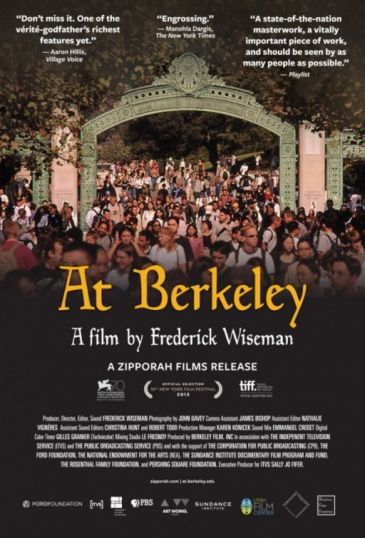 Selected as an opening film for the 4th Salaya International Documentary Film Festival, At Berkeley, a film by Frederick Wiseman, an experienced documentary film director who just turned 84. This 244-minute-film or precisely 4 hours and 4 minutes long, is referred to by the viewers as ‘long but not boring’ due to the classic Wiseman’s style that challenges the audience and other documentary filmmakers of our age.

Wiseman’s works have been apparent since 1970. Today, he has directed over 40 documentary films including both short and long documentary films as well as television documentary. His works are usually well thought through and require a lot of research. Often, his films pinpoint serious social issues so they typically call for a group of educated audience.

At Berkeley brings us to explore one of the most prestigious universities in the world through classroom sit-ins, lectures from the world’s famous experts in different fields to small group discussions in classrooms. Most importantly, it brings us to see student gatherings and faculty staff meetings in which the discussions and ideas are the sparks of our education system today. Wiseman basically shows us everything from the beginning to the end.

Some scenes of the movie could be quite difficult to understand as they require specific fields of knowledge such as biology chemistry, philosophy, astronomy, and economics. Despite the fact that they may not be easy to gauge, those scenes are the reflections of the real world’s interdisciplinary and the undeniable truth of Berkeley’s education.    Telling the story in a disconnected and separated manner might make the film looks like there is no main storyline, however, at some points, we will witness some minor traces of topics that have previously been mentioned. Nevertheless, the film does not give out any conclusion in those topics, but only raise questions for the audience to ponder through various viewpoints of different characters.

Throughout the 4-hour-long film, there is no voice over to introduce, connect, or conclude the storylines. There are no talking heads, no characters staring right at the camera, and no credit title inserts. Wiseman brings in the camera and pretends that it is one of the audiences in the room observing people without any human interaction. This is considered to be an ideology for the 1970s classic documentary films that aim to create credibility by destroying the being of the producer to show that he has absolutely no control over the incidents occurring in the films.

This practice is nothing new considering a long history of documentary films. However, the fact that we are now in the 2010s, the age of moving graphics, pictures, sounds, and innovative styles, keeping the original ideology all through 4 hours could be quite challenging for the audience’s intelligence and patience. And of course a greater challenge for wiseman, an 84-year-old director, himself.