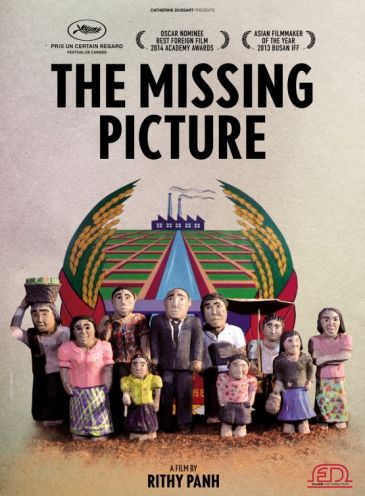 A Cambodian-French documentary film by Rithy Panh, a Cambodian director whose previous works have been on Red Khmers, the name given to the followers of the Communist Party of Kampuchea in Cambodia. His latest work, The Missing Picture, is very well received among the audience. It was awarded as the winner of Un Certain Regard at Cannes Film Festival 2013 and was the only documentary film nominated for Best Foreign Film Award at Oscars in the same year.

The Missing Picture possesses two crucial traits of documentary films, which are the ‘reflection of truth’ and ‘creativity’. Pahn tells the story through his very own experience; one night in 1975 when he and his family were banished from their own home in Phnom Penh to an impoverished village. The film takes the audience through their brutal encounters; family members disappearing one after another, through Pahn’s critical perspective on each incident as well as the Cambodian democracy. Another part of ‘the reflection of truth’ could be seen in the black and white footage, which of course, is considered to be a very solid proof for historical documentaries as the audience could judge the stories being told with their own eyes.

Nevertheless, creativity is the most outstanding attribute of this movie. Pahn’s style in elaborating the truth is very well thought through. The film opens up with a shot of piles of old films, followed by a shot of a beautiful actress dancing gracefully in front of the camera. All this is accompanied with the voice of Randal Douc, a Cambodian actor, narrating the story in French. The words that Pahn choose to narrate the story are so honest that, most of the time, they could be considered devastating. Sometimes, however, the words appear to have some sorts of philosophy hidden in them. Using the image of sea waves hitting the camera along with the background music that hints a sign of intrusion is Pahn’s main technique to reassert the audience emotions. However, the goal is not to aim at creating the feelings of devastation towards the incident.

Using clay figures to imitate the people missing from memories; family members, women, men, children, and elderly, then place them together in a clay house. Each one performing different daily activities and looking happy. Using oil paintings in many scenes combining with real footages is what makes this film special. Scenarios that are made up, but extraordinary real in the audience’s feelings.

The film shows changes and tragedies in very small details through both images and emotions. At the same time, it leaves a question for the audience to ponder what the missing picture is as well as what have been found or unfound.

Despite what the missing picture in Pahn’s head might be, one thing that this film perfectly achieves is how it creates a replica of the lost memories that has never been exposed in mass media among the Parisians or even people elsewhere. A replica that triggers many of us to revisit the history, learn a lesson, and make sure that it doesn’t happen twice.