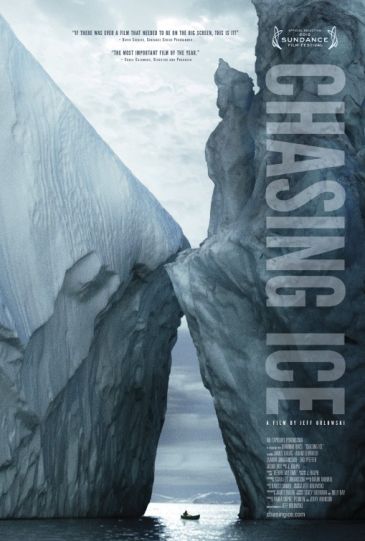 "The future is already here — it's just not very evenly distributed." - William Gibson

A documentary film by Jeff Orlowski that follows a National Geographic photographer James Balog and his team across the Arctic to capture images of rapidly-eroding glaciers in order to find the answers to the skeptical questions over the topic of climate change.

This film received numerous nominations, one of which includes Sundance Film Festival 2012 Cinematography Award. Not only its beautiful cinematography, the film bit by bit reveals how much effort its production team has put into capturing breathtaking footages featured in the movie; some shots even determine the life and death of the cameraman.

Balog and his team formed what they called the EIS or Extreme Ice Survey team and began their journey across Greenland, Alaska, and Montana to capture the word’s changing glacier at over 30 spots. They spent over 3 years struggling to capture all the moments they need in order to turn them into this beautiful documentary film of how our world is changing.

One of the most significant scenes in the movie is the scene from a glacier calving event that took place at Jakobshavn Glacier in Greenland, lasting 75 minutes, the longest event ever captured on film.

His hauntingly beautiful videos compress years into seconds and capture ancient mountains of ice in motion as they disappear at a breathtaking rate. Another highly impressive angle of this movie is how the camera had to be panned a few times in order to keep up with the pace of the ice calving, which went further from the initial point for over 1.25 miles, when his first intention was to capture only a wide shot of it.

Before his journey, Balog never believed that human beings are capable of changing the physical and chemical aspects of this great big world, but he realizes now that it is possible to do so. And as the audience of this film, we are about to witness an attempt of a group of human beings that could, too, change the world.

At Berkeley
All content, design, and layout are Copyright © 2011-2014 MEALPHOTOGRAPHY All Rights Reserved. Reproduction in whole or part in any form or medium without specific written permission is prohibited.